Welcome to the Around The NFL End Around, a weekly look back at the world of the National Football League. Dan Hanzus serves as your guide.

1. Tom Brady: The NFL tried to keep Brady off the field in September. Not only did 12 play, he took home the league's Player Of The Month award. The lesson, as always: Tom Brady wins.

2. Julio Jones: The Falcons wide receiver is on pace for 181 receptions, 2,346 yards and 21 touchdowns this season. That's good! We haven't seen a season like that since Jets wide receiver Rob Moore (in my iconic Tecmo Super Bowl season of 1992).

3. Patriots beat reporters: Tight end Michael Hoomanawanui was traded to the Saints, ensuring they'll never have to look up the spelling of his name ever again.

1. Josh Scobee: Scobee's Steelers tenure will be a rough one to include on the old job résumé. Perhaps he can leave it off entirely, like I did with my eight-hour career with Slomins Shield as an ineffective cold-caller of elderly women.

2. Victor Cruz: The Giants wide receiver could be out several more weeks after aggravating a calf injury. This is why you don't tempt the Football Gods with premium cable glory docs called I Am Giant and mansion celebration parties dubbed "The Return".

3. Cody Parkey: The Eagles kicker is out for the year after tearing all three muscles in his groin. This will probably curtail more than his football activities.

Who knows if this is the last season at the Edward James Olmos Edward Jones Dome, but I feel like the field literally bursting into flames is kind of a foreboding sign. The game was delayed when the on-site vacuum failed to properly remove burnt rubber pellets from the field in a timely manner.

Perhaps some better equipment would have helped ...

The Ryan Mallett Experience continues to be enjoyable

As I wrote last week, I have no idea how much longer we'll get to enjoy Ryan Mallett as a legitimate NFL entity, but let's just soak in every moment of the Texans quarterback who carries himself like a Season 2 antagonist from Ballers. 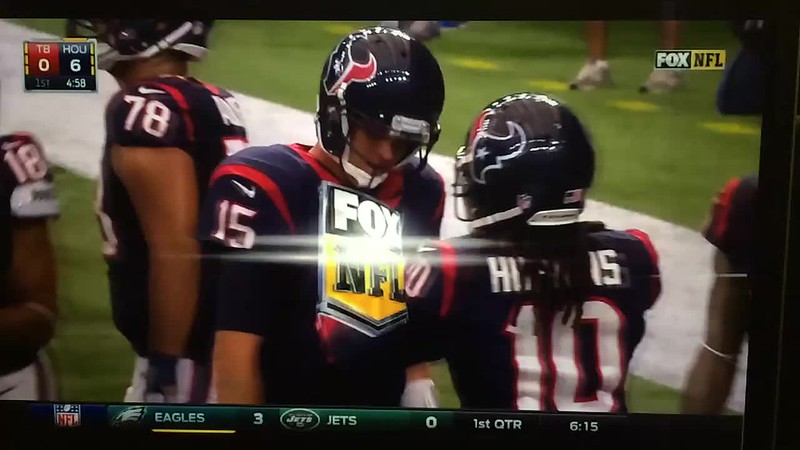 That leg kick! That "Eff everybody, I'm a god!" sideline glare! I want to bottle his essence and turn it into Axe body spray.

Here's the recommended way to watch the Dolphins this year

Yeah, the Dolphins are down, but their fans are still repping HARD. pic.twitter.com/zhG6cu42Or

Did you know Joe Philbin is still the coach in Miami? Like, they willfully decided to bring him back for another season? Hope London doesn't have import limits on charisma!

Jets tight end coach Jimmie Johnson brought his son to his team's home game against the Eagles on Sunday. The spawn decided this would be a good time to bury prominent Jets players on Twitter. A collection of the tweets, each of which were accompanied by a photo of a player at a pregame function:

Y the f you worried about my family. If it wasn't for your dad you woul dnt be nothing in life @JimmieJ82. You better watch yourself son.

My father is not a violent man. But Papa Hanzus would literally end me if I went to his office and pulled something like that. And here's the craziest thing: Jimmie Johnson's son is 24 years old.

This is what I call a top-shelf regional tailgating exercise

One potential negative: How the hell do you eat a lobster in a parking lot? There's a reason why hamburgers and hot dogs have stood the test of time in such settings.

Had to shred my guy Colin Kap today! He was awful in his reads, throws, footwork and mechanics! He has the toolset, but doesn't use them!

You may recall ESPN analyst Ron Jaworski dropping this doozy in August 2013: "I truly believe Colin Kaepernick could be one of the greatest quarterbacks ever. I love his skill set. I think the sky's the limit." He changes his tune officially after Kaepernick melted down with four interceptions (including two pick sixes) in a blowout loss to the Cardinals on Sunday.

Two things: First, let this be a reminder to take much of what you see and read in August with a grain of salt. There are a lot of hours to fill at that time, and only so much to talk about. Second, you'll notice Jaws doesn't even admit he was wrong. Rather, it was Kaepernick who has failed to make the most of his generous "toolset."

This doesn't feel quite fair. Back in the summer of 2013, I got sucked in by a couple of strong Brandon Weeden preseason games and declared the then-Browns QB would throw 30 touchdowns. I was stupid, and possibly on drugs. But I didn't blame my failure on Weeden's inability to reach his potential. I simply got it wrong ... and I owned up to it! It's OK to be wrong. Forget the spin zone.

I cannot love this enough ...

More: "Why can't they just stop fighting all the time?" Luck then reportedly began trembling after hearing a loud crash followed by a disconcerting silence." 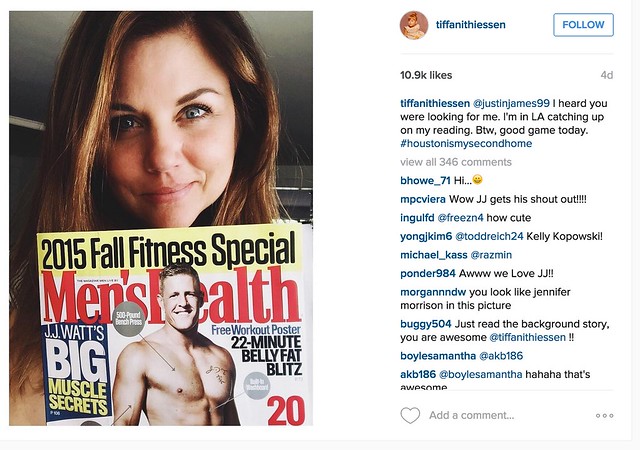 OK, let's unpack this. Watt was born in 1989, which means he was a toddler during the SBTB glory years of the early 90s. Could he have caught up on the show in syndication as an adolescent? PERHAPS, but Watt's demographic typically skews away from Bayside and toward the wretched, overrated, basic Boy Meets World as the generation's kitsch, youth-oriented nostalgia fix.

What's my point? I'm not sure. I suppose I'm just annoyed that Watt is getting flirtatious social media messages from Tiffani-Amber Thiessen while legitimate fans (LIKE ME) have nothing to show for their loyal fandom other than an intricate knowledge Rod Belding's ulterior motives and a wildly crappy Lifetime movie based off a trashy tell-all book written by Screech.

Chalk this up to just more evidence of the privilege afforded to rich, famous, transcendentally talented professional athletes. Stop appropriating my culture, bro.

Oh dude, give it a rest

I probably would've given ol' Mercury a pass if J.J. Watt didn't get me so upset. Blame him.

Is there any question that Ciara is in total control of this relationship?

Quote of the Week, Part I

Quote of the Week, Part II

"Some may say that's a little over the top or whatnot, but it didn't really cost that much, so why not? We're basically trying to replicate everything that we're doing here over there."

-- Jets senior manager of team operations Aaron Degerness, on why the team brought 350 rolls of toilet paper to use in place of the thinner toilet paper available in England.

Hero of the Week: Pats fan who was given Brady's 400th touchdown ball

After Danny Amendola caught Tom Brady's first touchdown pass on Sunday, he did something he shouldn't have. Amendola flipped the ball into the stands, unaware that Brady had just thrown his 400th touchdown pass.

Brady and the Patriots could've been in an uncomfortable situation if the fan in possession of the ball -- a longtime season ticket holder named David Bowen -- had held the pigskin hostage for a king's ransom. (Ask A-Rod how fun that is.) But the fan quickly returned the ball, and was rewarded for his act of decency with the chance to meet Brady himself.

"He was very generous, he was very nice to us," Bowen said, per the Boston Herald. "It was overwhelming, it's something I'll remember forever."

Now I'm ending my column with feel-good stories about the Patriots. That's how you know J.J. Watt got me worked up. I'm gonna go lie down.

This article has been reproduced in a new format and may be missing content or contain faulty links. Please use the Contact Us link in our site footer to report an issue.

Baker Mayfield delivers magical win for Rams on Thursday night: 'I don't know if you could write it any better than that'

Just two days after he was claimed by the Rams off waivers from the Panthers, Baker Mayfield led a 98-yard game-winning touchdown drive to push his new team past the Raiders.

2022 NFL season, Week 14: What We Learned from Rams' win over Raiders on Thursday night

Having been claimed by the Los Angeles Rams on Tuesday, Baker Mayfield rallied his new squad past the Las Vegas Raiders on "Thursday Night Football" for a 17-16 victory in near-miraculous fashion.

Las Vegas Raiders running back Josh Jacobs left the game briefly due to a hand injury, but returned against the Los Angeles Rams.

The official inactives for the Las Vegas Raiders at Los Angeles Rams on Thursday night.

Arizona Cardinals tight end Zach Ertz told reporters on Thursday, while accepting his Man of the Year nomination, that he suffered tears to both his ACL and MCL, requiring surgery to repair both ligaments.

NFL.com keeps you up to date with all of the latest league news from around the NFL. Visit NFL.com's transaction hub for a daily breakdown.

The Atlanta Falcons will be turning to rookie quarterback Desmond Ridder as their new starter, NFL Network Insider Ian Rapoport reported Thursday. Ridder will be replacing Marcus Mariota, who had a 5-8 record as the starter this season.

As the NFL world continues to wait with occasional glances toward Odell Beckham Jr., Philadelphia doesn't appear as interested in the receiver as some of its rivals.

The Ravens are sitting in a decent spot entering Week 14, but they know their next task won't be an easy one. Baltimore meet the Steelers this weekend, a team they haven't defeated in over two years.

Lions QB Jared Goff: 'I feel like I am playing the best football of my career right now'

Coming off a 40-14 win over the Jacksonville Jaguars in which he threw for 340 yards, two touchdowns and no interceptions for a career-best fourth game in a row, Jared Goff has been a catalyst for the Detroit Lions' run of success and believes it's because he's playing as well as he ever has in his seven-season career.

Rams QB Baker Mayfield expected to be active, has real chance to play Thursday vs. Raiders

Los Angeles Rams quarterback Baker Mayfield is expected to be active tonight against the Las Vegas Raiders and has a real chance to play, NFL Network Insider Tom Pelissero reported.

Could Baker Mayfield see action Thursday night against the Raiders? Rams head coach Sean McVay told reporters that they're "working through" their new quarterback's status for the game.

NFL+ gives you the freedom to watch LIVE out-of-market preseason games, LIVE local and primetime regular season and postseason games on your phone or tablet, the best NFL programming on-demand, and MORE!

MORE
The browser you are using is no longer supported on this site. It is highly recommended that you use the latest versions of a supported browser in order to receive an optimal viewing experience. The following browsers are supported: Chrome, Edge (v80 and later), Firefox and Safari.